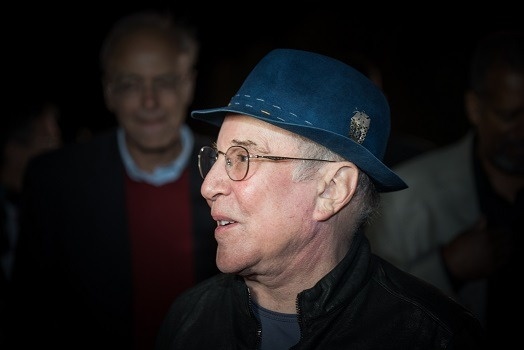 Paul Simon, second from left in blue hat, is mobbed by admirers following his Los Altos Hills performance. The pop music legend signed autographs and posed for selfies with guests. He started with the sound of silence and ended with more “lie-la-lies” than anyone but Paul Simon is entitled to.

“Just taking in this view for a second,” Simon said, pausing to absorb the panorama from Julie and Carlo Panaccione’s Los Altos Hills backyard. “Just like Manhattan.”

Approximately 150 people shared Silicon Valley’s comparatively modest skyline with Simon Oct. 1 at an outdoor private benefit concert for The Life You Can Save, a nonprofit advocacy and educational outreach organization that fights extreme poverty.

Most of the audience members donated at least $1,000 per ticket to the charity to hear Simon perform. It may be their last time; Simon, who turns 75 Thursday, has hinted at retirement in recent interviews.

“I’ve only waited 50 years for this,” one enthusiastic fan told Simon as he mingled and shook hands after the show.

Although Simon is currently touring to promote his 13th solo studio album, “Stranger to Stranger,” his local show stuck to Simon & Garfunkel standards and hits from his prolific solo career. He strummed an acoustic guitar and shared the small stage with just one other musician, guitarist/cellist/piper Mark Stewart. The audience knew the narratives, of Lincoln Duncan, Julio and the homeward-bound musician, by heart.

During “Mrs. Robinson,” it got political.

“Going to the candidates’ debate,” Simon sang, pointedly pausing for effect. “Laugh about it, shout about it, when you’ve got to choose. Every way you look at it, you lose.”

And later, between songs:

“How prescient can you be?” Simon said. “Nineteen sixty-eight. Wasn’t that torture to watch? Wow. Oh man. I just said, ‘Wow.’ The presidency.”

Simon referred to Junior Parker’s bluesy “Mystery Train,” the fourth of his nine-song set, and George Harrison’s “Here Comes the Sun,” the seventh, as two of his favorites. He whistled and beat-boxed through the end of “Me and Julio Down by the Schoolyard” and employed a falsetto through the last chords of “Slip Slidin’ Away.”

The performance – famously mournful lyrics backed by the stripped-down melody of raw, acoustic guitar – could be melancholic, but Simon peppered his transitions with hopeful insight appropriate for the cause and modern times in general.

“Small events can produce large ripples, and the effects go out into the world,” he said.

That’s what Australian philosopher Peter Singer hopes. He’s the founder of The Life You Can Save, which partners with international charities like Oxfam to shift cultural norms so that living ethically means the fortunate – moderately comfortable individuals – extend their blessings to reduce the number of preventable, poverty-related deaths globally.

“We can’t just sit back and leave it to others, or say, ‘It’s none of my business.’ Because it is all of our business,” Singer said. “It’s our business because we have the means to do something, to do a great deal of good for some people at relatively modest cost to ourselves.”

For more information on The Life You Can Save, visit thelifeyoucansave.org.